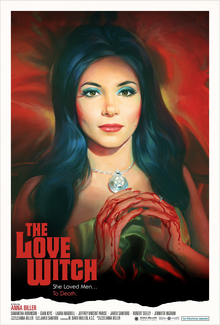 Written, directed, edited, produced, scored, costumed, and set designed—whew!—by Anna Biller, The Love Witch follows Elaine (Samantha Robinson in a gloriously affected performance), a young woman who resorts to love magic to find a man, and is perhaps one of the most ambitious films in the last. . . pick a timespan. The reason? Biller enlisted period cinematography expert M. David Mullen to shoot The Love Witch on 35mm stock and to recreate the look and feel of films from the 1960s. The result is so effective, it’s difficult at times to wrap your mind around the fact that it was only filmed a few years ago, and only brief moments when modern cars or iPhones appear on screen break you from that illusion. The Love Witch’s appearance is perhaps what first gave the film exposure when it had its limited release in 2016, but without substance, the film would simply be a cool cinematographic experiment. Thankfully, The Love Witch is as thematically deep as its color palette.

Throughout the film, Biller flirts with parody, pastiche, and homage, but to label The Love Witch as any one of those is ultimately reductive. In fact, even labeling its genre as “comedy” or “horror” or “romance” is a vain attempt at boxing a truly unique film into easy-to-digest cinematic conventions. Perhaps the best comparisons are from the 60s and 70s—the technicolor melodramas, the softcore erotica, the psychosexual thrillers, and the giallo films of those decades—but The Love Witch boasts a sharper feminist critique than any that might come to mind. And that’s the key: although on initial glance it looks like an elaborate recreation of a bygone style of filmmaking, the feminist themes are decidedly modern.

Stylistic flourishes and eccentricities need to serve the story, and in this case the style definitely bolsters the themes. The movie takes place in a contemporary time, but the look is dated. This parallels modern society: specifically, women’s rights may have progressed, but many of those changes are superficial. As the #MeToo movement has shown, we still live in a man’s world and women bear its consequences. At its core, The Love Witch is a story of a woman trying to own her femininity and sexuality, but the outcomes are disastrous. In fact, many of the film’s men turn eager at the prospect of sex, but once Elaine’s desires pivot from sex to love, the men become allergic to her; they’re literally incapable of love, while sex and love are intimately intertwined for Elaine. In a way, Biller challenges the idea that we as a society have evolved significantly since the 60s and 70s and implies that sexual liberation might play into men’s desires more than women’s. The cinematography, like our world, is stuck in the mid-century.

The Love Witch is Biller’s sophomore feature; she had previously made the similarly ambitious (and perhaps even more niche) Viva, a sexual revolution satire which she also starred in, and between the two films, Biller proves herself to be a true visionary. Both are worth checking out, as her currently in-production third feature will likely be. Simply put, no other modern filmmaker is doing what she’s doing—nor as intelligently.

Michael Owens is a screenwriter from Long Beach, California, and graduated from the University of Southern California’s School of Cinematic Arts with a degree in screenwriting. As a writer, Michael tends to pair a progressive worldview with character-driven stories, and he currently reviews screenplays and other creative material for Pipeline Media Group as a Senior Development Executive.