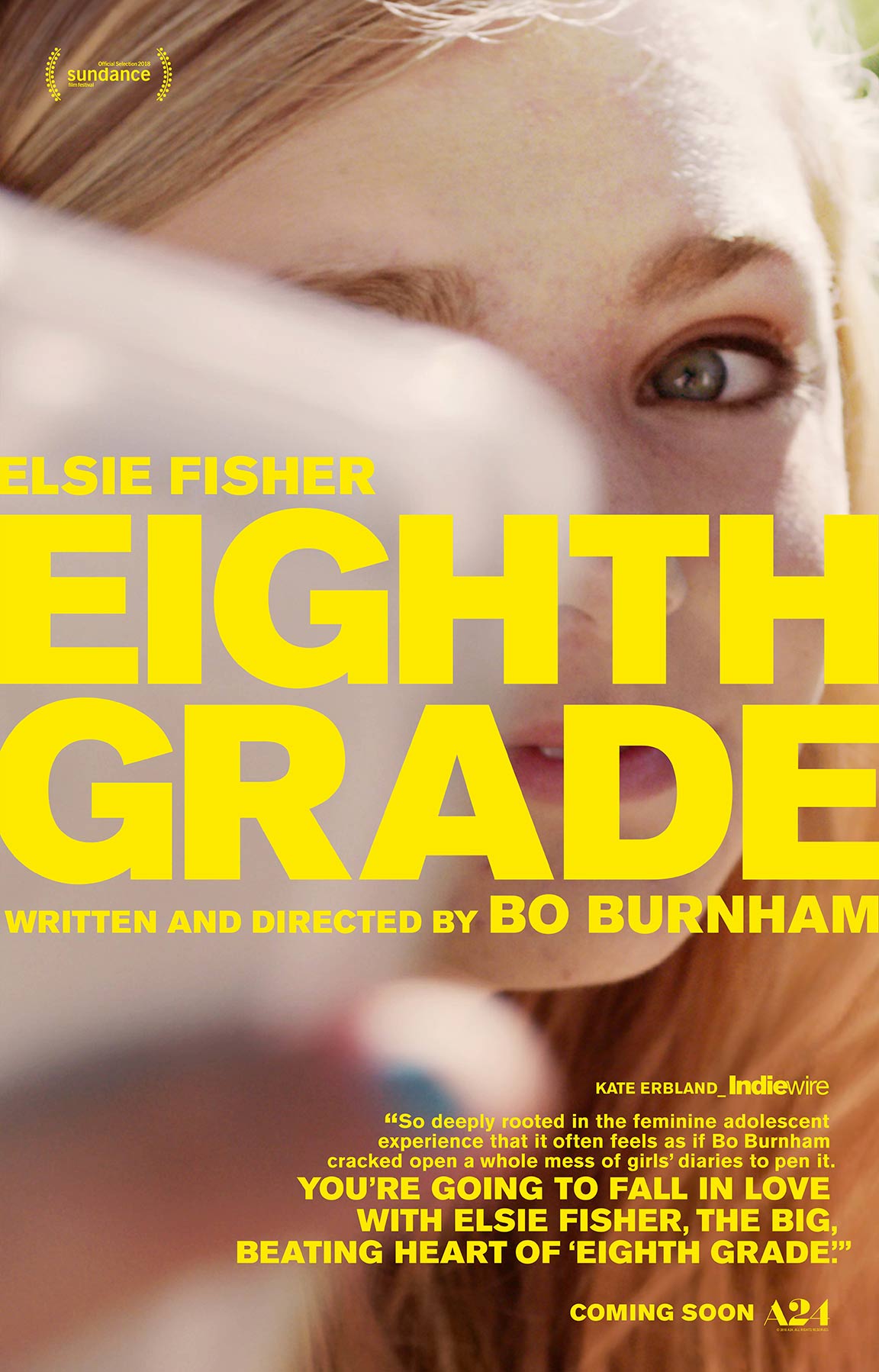 A beautiful, uncomfortable portrait of everyone’s most traumatizing school year, Eighth Grade follows Kayla, your typical, uninteresting 13-year-old girl. Online, she creates videos to express herself, giving advice on topics she is woefully unqualified to talk about, such as: being yourself, having confidence, making friends. In real life, she is a quiet loner, hopelessly awkward, and desperate to fit in.

Kayla goes through all of the hallmarks of coming of age. Crushing on a boy out of her league, going to a pool party she was only invited to out of obligation, trying to make friends with older kids, disconnecting and reconnecting with her single dad, etc. All of this culminates in her graduation from 8th grade into her freshman year of high school, having grown up. . . just a little bit.

Normally, this is the part of a film review where we’d get into our synopsis and talk about plot details, what Kayla’s arc is for the film, the various subplots, etc.

Except there’s one problem. Eighth Grade has none of these things.

And yet, it works.

I have likely chastised hundreds if not thousands of screenwriters for not having a proper plot in their stories. Now I need to explain myself to all of them. Bo Burnham can have no plot in his story and have it work; you, dear writer, probably can’t. Here’s why. . . .

Film as a medium has captivated us for over a century because of its unique ability to convey character, period, tone and emotion in a way that is simply impossible on the page. If you were to write a novel about a modern-day 8th grade girl, you could try describing some of the things you see: they’re always on their phones, they’re awkward around boys, they’re obsessed with social media, they have fresh acne and don’t know how to quite cover it up with makeup yet. All of it would come across as trite and inauthentic.

The reason it works in a filmic medium is because Bo Burnham captures this stage of life in a way that can only be captured visually. You could spend pages describing an Instagram feed, or Snapchat filters, or a Tumblr dashboard. You could wax poetic about how kids can get sucked into it for hours before bed, slowly watching their confidence dwindle away.

And we, as readers, would be bored to tears.

Burnham does this instead through an overlaid montage, to the tune of Orinoco Flow by Enya. We watch Kayla’s bored, expressionless face as she scrolls and scrolls and scrolls, liking pics, taking Buzzfeed quizzes, checking Snapchat stories. This is all done without judgment, or derision. It’s simply how it is. It’s the truest expression of her current state of being. You just can’t do that in a screenplay.

The only reason Eighth Grade works is because of Burnham’s masterful direction and savvy to our modern world. If some other director, say, Richard Linklater (sorry, Rich…) were to have directed this script, it might very well have been an unmitigated, directionless mess.

I say this not to discourage writers from writing low-concept, character driven stories, but to encourage them to go out and make that film themselves (feature or short). A script like Eighth Grade would likely never sell on its own. It would probably hit dead ends in contests.

But as a film? It’s poetic. It’s timely. It’s authentic. And it’s the type of work that puts someone on the map.