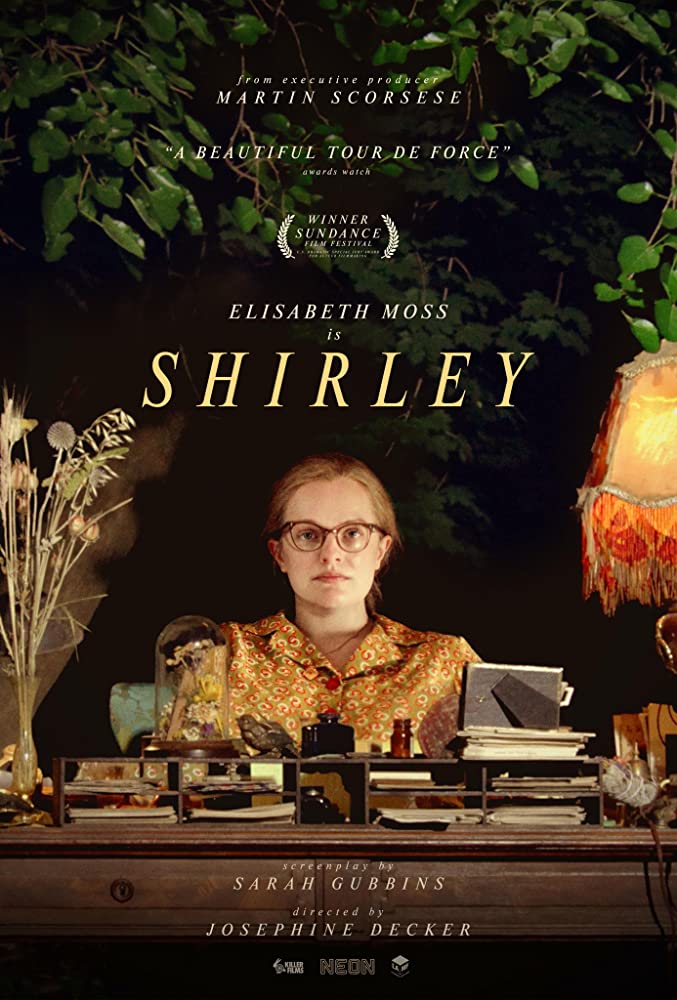 What the hell did I just watch?

Every now and again as a cinephile, you’ll come across a movie that’s as thought-provoking as it is challenging—an experimental piece of filmmaking that’s visually arresting, pushes the boundaries of genre-blending and thematic discourse, and is altogether difficult to digest. It’s the type of picture that is so heightened stylistically in its execution that it will inspire a love-it-or-hate-it reaction from audiences, with no room for anything in between. It’s akin to a Cubist painting—conceptually, there’s absolutely no way it should work. And yet? It does.

Not only does Shirley succeed in this regard on all fronts, but it serves as an indelible proclamation: that while edgy, out-of-the-box, and independently-minded cinema is getting increasingly difficult to make, it is not dead.

Based on the 2014 novel by Susan Scarf Merrell, Shirley follows the real-life, dangerously unhappy married couple Shirley Jackson, a mentally unwell writer, and Stanley Hyman, a lothario literary critic and college professor. Many of you know Shirley from her unsettling classics The Lottery and The Haunting of Hill House. As Shirley and Stanley take in a young couple to their picturesque Vermont home, they enact a sadistic game of psychological cat-and-mouse to break up the blissful couple, which, in turn, inspires Shirley’s forthcoming book.

Everything that a movie “isn’t supposed to do” in principle, Shirley does. It’s a mixture of period drama, psychological thriller, and avant-garde art-house. It’s an incredibly deliberate slow-burn piece with a plot that’s not easily accessible. The characters are theatrical to the point of being ripped from a Sam Shepard or Tennessee Williams play. And despite the deck being stacked against it in every single conceivable way? Shirley grabs you by throat and doesn’t let go for its entire 107-minute runtime.

From a film theory perspective, it’s a fascinating game of three-dimensional chess that Decker is playing with the audience. On one hand, the movie is a deconstruction of the institution of marriage. By looking at marriage through two very different viewpoints—the seemingly idyllic union of Rose (Young) and Fred (Lerman), and then the soured perversity of Shirley (Moss) and Stanley (Stuhlbarg)—Decker sets up a thoroughly engaging philosophical debate. Moreover, by showing these two opposite extremes, and then slowly seducing Rose and Fred to the “dark side,” the film poses the question: were these characters simply corrupted by Shirley and Stanley, or is the very practice of traditional marriage (and love) a futile exercise that will undo all those who partake in it—like grapes left to rot in the hot summer sun?

This thematic discussion is enough on its own to be compelling viewing. But Decker and screenwriter Sarah Gubbins don’t stop there. The movie also wrestles with the myth of the creative muse—the lengths that an artist is permitted to go to in order to create a masterpiece. Obviously, Shirley takes a terrifically unsettling, awesomely hyperbolic, and ultimately “genre-y” approach to this topic. Through Shirley’s manipulation of Rose, Shirley investigates the age-old query—do the ends justify the means? Specifically, to what lengths are we as a society willing to forgive the cruelty and misbehavior of an artist that forges truly breathtaking work?

Finally, as the icing on the cake, there’s the psychological thriller aspect of Shirley. Watching a character’s mental health slowly deteriorate over the course of a film is nothing new. How Decker approaches this trope, though, is nothing short of inspired. The way she incrementally ratchets up the tension between Shirley and Rose through small moments with increasingly dire consequences is brilliant. By having Shirley slowly transform Rose into someone more like her, she, in a sense, serves as the Darth Vader to Rose’s Luke Skywalker, a character dynamic that makes for an absolutely delicious watch.

While Shirley is certainly not a perfect film by any means, by successfully combining all of these not intuitively like-minded storytelling ingredients, Decker has crafted an enthralling cocktail—a delectably stiff drink for anyone with the stomach for it.

Shirley is available on Hulu, Neon’s streaming partner, as well as to buy/rent via on-demand platforms.