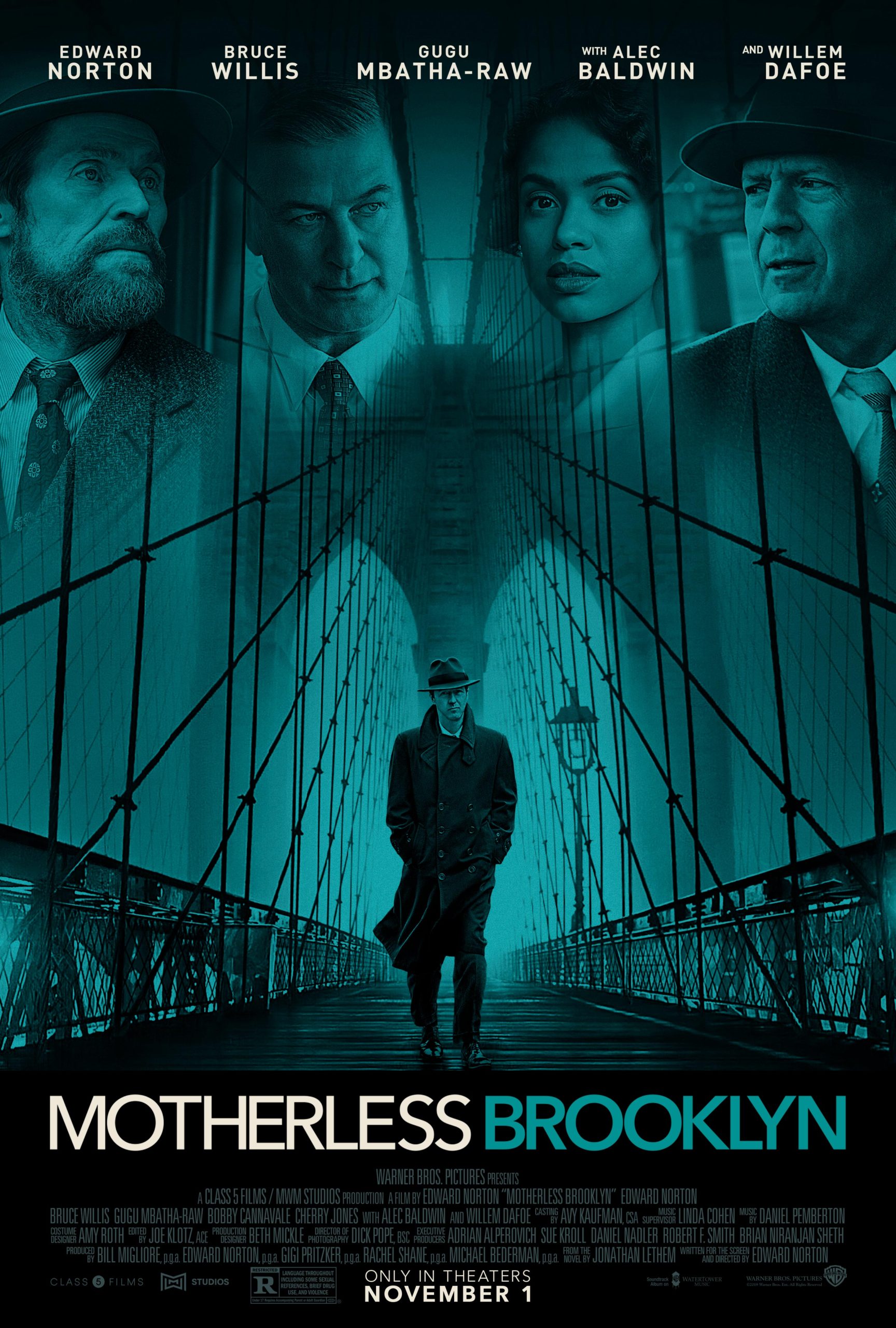 If you’re like me, you’ve probably spent a fair amount of time of this COVID-19 shutdown taking in film and television, running the gamut from brand new titles released via streaming to catching up on stone-cold classics (here’s looking at you, The West Wing). With this bit of extra freedom to let my analytical film theory brain ruminate, I’ve noticed a trend—every year, there is at least one movie released that I really love which is met with mixed critical reviews and/or poor box office returns. For example, in 2016 it was The Nice Guys, 2017 it was Only the Brave, and in 2018 it was Bad Times at the El Royale. I was enamored with all three, but the general public consensus was that, in one way or another, they didn’t quite cut the mustard.

And for 2019? My choice is one that’s incredibly polarizing, more so than all three of those previous films combined:

Motherless Brooklyn, the 1950s, neo-noir detective film written, produced, directed by, and starring Edward Norton—after a glitzy world premiere at the Telluride Film Festival—was released by Warner Brothers on November 1st. The (very) loose adaptation of Jonathan Lethem’s novel performed miserably at the box office, grossing only $18.5m against its $26m budget, and was incredibly divisive with critics, as evidenced by its 63% rating on Rotten Tomatoes. Mostly, people either loved the film or loathed it, with seemingly no in-between.

Here’s the thing, though: the film is absolutely, undeniably brilliant and is destined to become a cult classic—a title not fully appreciated until 5-10 years from now. Norton has a habit of being involved with projects like this, the best example being Fight Club, which completely flopped when it came out in 1999, but is now widely considered one of the greatest films ever made. It seems inevitable that Motherless Brooklyn will join Fight Club’s ranks of under-appreciated-at-its-time masterworks.

And you can take that to the bank.

None of this is to say Motherless Brooklyn is an “easy” picture to digest. It’s incredibly wordy and leans heavily into hard-boiled, gumshoe-style dialogue, features a ton of voiceover, implements a dense, intricate, and highly-stylized plot, and is probably about 10-15 minutes too long.

But if you can get “on board” with those things? Motherless Brooklyn is a rich, thought-provoking, and gorgeously photographed film steeped in the neo-noir traditions of pieces like Chinatown, L.A. Confidential, and Heat.

To do this? Norton made a series of incredibly bold, uncompromising, auteur-like choices. For our purposes, Norton’s wholly distinctive point-of-view is best examined through the symbiotic connection between its storytelling structure and the frenetic internal life of its protagonist, Lionel Essrog (Edward Norton), a detective suffering from Tourette’s Syndrome.

The way Norton executes this layered, highly complex plot is nothing short of genius. Not only does the film excel in the neo-noir genre trope of dissecting the sprawling, seedy underbelly of a massive American city, its themes also perfectly complement the psychological state of Essrog.

By maneuvering the audience through the fragmented, knotted, and dense machinations of its central storyline, the picture superbly mirrors the fragmented, hyperactive, and frenzied nature of Essrog’s brain due to his Tourette’s. Like Essrog himself, we are never exactly sure what is going to happen or what is going to be said. This roller coaster ride of uncertainty and intrigue is awesomely accentuated by Daniel Pemberton’s feverish, Golden Globe-nominated jazz score, as well as Essrog’s aforementioned continuous voiceover, making for thrilling and utterly immersive viewing. And it certainly doesn’t hurt that Norton’s portrayal of Essrog is pitch-perfect—easily one of the best of his career.

Everything said and done, this hyper-stylized, daring, and fearless piece of filmmaking is not going to be everyone’s cup of tea. But, I urge you to defy the critics and box office receipts and approach Motherless Brooklyn with an open mind. Because if you do? You’ll be thoroughly rewarded with an inventive and altogether unique piece of cinema.

Peter is a writer hailing from the great commonwealth of Virginia. Wired Shut, his first feature film credit as writer-producer, is out now on Digital, VOD, and DVD. It is currently nominated for "Best Screenwriting Motion Picture" at the 2022 Leo Awards. Peter is currently based in Brooklyn, where he divides his time between developing a slate of new projects (including his debut novel), walking his lovably cranky dog, Panda, and exploring everything that the greatest city in the U.S. has to offer. He is also the Director of Operations at Book Pipeline and the proud co-host of the Pipeline Artists Original Podcast, This Podcast Needs a Title.