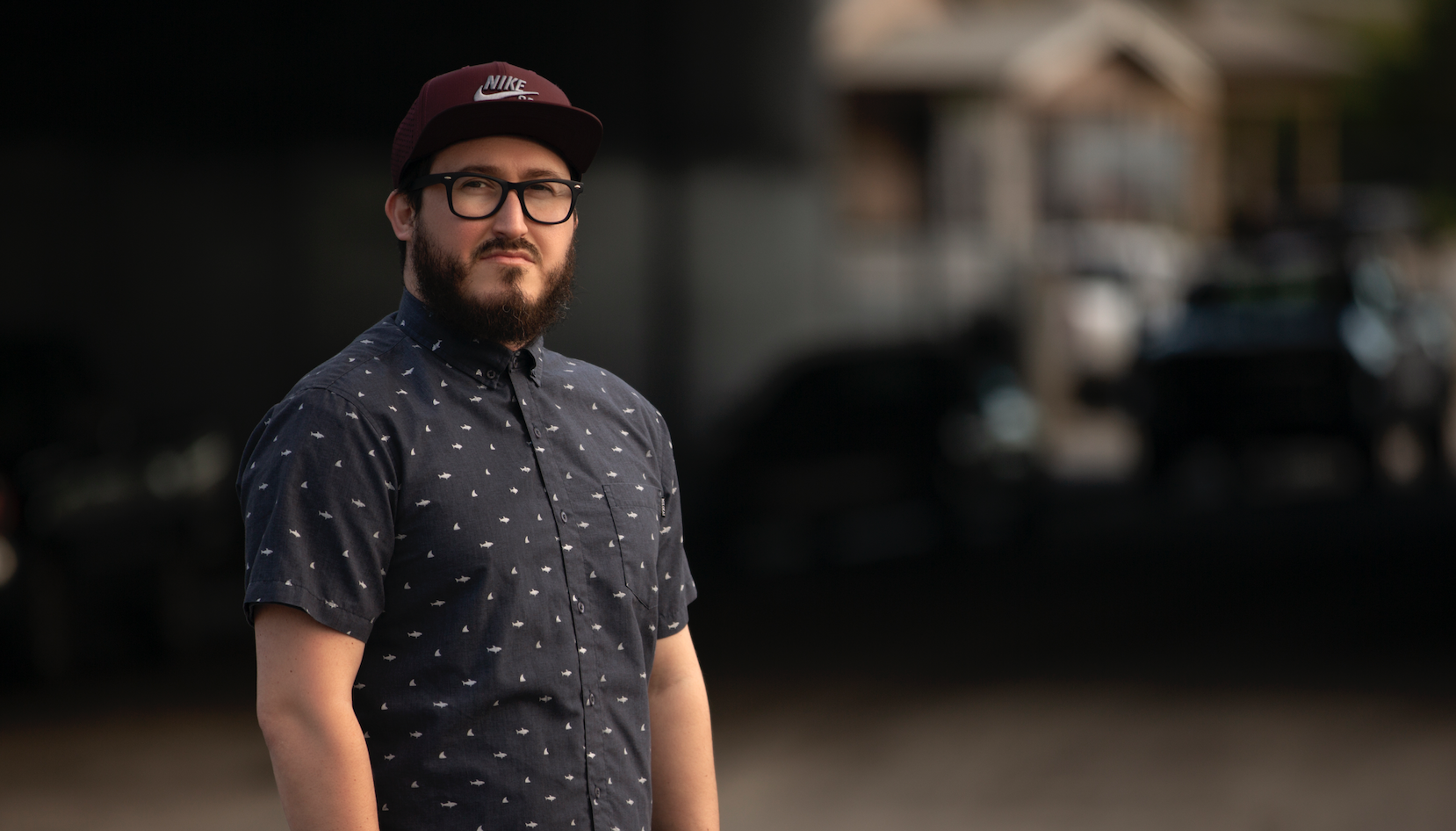 Multi-hyphenate Bernardo Duran Jr. won the 2019 Film Pipeline Short Script competition with the thoroughly imaginative Blank. His credits as a producer range from multiple short films to associate producer on Creed II. Blank will be his first animated project.

Few short scripts are more ambitious than ones specifically intended for animation. Not because the storytelling process changes (well. . . not necessarily, anyway), but because of the logistics—for any filmmaker, at any level. What had to fall into place prior to writing the script for you to say, “okay, I can make this happen?”

Logistically, the greatest variable for me was whether I could pull my resources as a producer, knowing nothing about animation, to then inspire a team of people to help bring my vision to life as a director. I really felt that I needed a crew of creators who would be patient with me as I learned a new method of storytelling and were crazy enough at the same time to dream with me and indulge my every instinct.

Lastly, I really wanted to find an animator from my community to help tell this story. I wanted that person to understand the nuances of its different sub-communities and its evolution through the generations. In a really serendipitous and roundabout way, Greg Jones (producer) and I were introduced to Ambrosio Garcia, a childhood friend of mine who I had lost touch with since the late 90s, who was now animating professionally. Once Ambrosio and I met and riffed on the story and imagined how to milk every moment visually, I knew it was time.

It’s a powerful short. Simple in the way a Pixar short film is simple: easily digestible, but perspective-altering. Was the script intended to make a point about identity, growth, and humanity? Or did that all “just happen,” as sometimes things magically do in development?

It’s a great honor to have my script be considered in the same sentence as a Pixar short, so thank you for that.

I watch a lot of television and film, and over the years I realized that my reality, as someone who grew up in proper East Los Angeles, is alluring to people from other parts of the country who have now transplanted into my community. It used to be taboo to be from East Los Angeles when I was growing up, and now, many seem to want to be a part of that history. Every opportunity I get, I try and make the distinction of what East Los Angeles really is, “East of Boyle Heights,” or “Not Silverlake or Echo Park,” and of course I make sure to say, “We even have our own ‘Welcome’ sign.” I bring this up because I want my community to be represented correctly (as anyone should), from its nuances to the bounds of its streets. I wrote this short script in hopes that it is a closer representation of that.

Blank’s genesis actually came from a meeting with my animator over another project I had written, also based in East LA. We started talking loose character design and Ambrosio started sketching ovals and lines, outlining a character. Every time I mentioned something new or made an adjustment, it was reflected in the sketch almost immediately. By the way, after twenty years of not seeing each other, Ambrosio and I were catching up in-between all this. As we weaved through sketching and “what have you been up to?” and “what are your thoughts on this?” I realized that were on the same page about a lot, namely in the love that we have for the community we grew up in.

I was immediately inspired to write Blank, to yes, make a film about identity and how our surroundings mold us, but to also aim the spotlight on us from the community and to question how we can help elevate, preserve and change it for the better. I really want this piece to be empowering and inspirational—I wouldn’t have this perspective if it were not for the countless exemplary peers and role models I had growing up. And I don’t just mean academically or professionally, I mean those who’ve done their part in their own homes as well, who through the years combated the stereotypes and made an impact on our youth.

Additionally, I think it’s worth mentioning that I wish I could have addressed all the people from this community who lost the battle navigating through the system and made decisions that changed their lives and the lives of others. I would have loved to, but that deserves its own telling that digs beyond the surface of gang life—and probably by someone who is more directly affected by those realities, whereas my experience with it is only in the fringe. This piece is also about the systemic victims only in the way that we have grown from the collective experience. Whether it was drugs or gang violence, we can now articulate how the system created roads that are limiting in opportunities and long in redemption for people of color, and we are better equipped and empowered to change our landscape.

Did you start your film career as a writer?

The real answer to this is yes—kind of.

Technically, I started as a film student who applied to school thinking he would be solely a writer. I had zero experience in creative writing, and as an audience member, never dissected movies enough to know beyond my first opinion of them. It took me years to understand the fundamentals of storytelling and even longer to articulate why a story either resonated or didn’t. In my first semester at the USC School of Cinematic Arts, I started producing because it felt like the most natural path for me—not because I wanted to, but more so to help my friends do their projects as I learned from them.

This quickly opened up doors for me in the producing world. While in school I worked as the In-House Producer for Canana, a U.S. and Mexican production company previously owned and operated by Diego Luna and Gael Garcia Bernal. I then ventured over to Silver Pictures, famed producer Joel Silver’s production company, as a Finance Manager. I kept producing short films with friends over the years, and to be honest, had not thought of writing since my first year at USC.

Fortunately, I’ve had the privilege of working with some great creators and their creativity is very contagious; I started writing again while on production on Creed II, directed by Steven Caple Jr., where I served as Associate Producer. It took me years to stare at the blank page again and not feel intimidated, and I think it has been a result of all the different angles I have had the opportunity to learn from that in part have helped me find my voice.

You’ve been a producer for years, and it’s relatively rare to see a producer jump to writing and directing. For whatever reason, there’s a divide. But what has producing shorts and features taught you that all writers and directors should understand? How has it rounded out your perspective of the creative process?

An important lesson I’ve learned is that everyone making a film, whether short or feature, is important in the execution of your project. I’m guilty of often writing pages with overly subtle prose and dialogue, and while this is often perceived as a preferred approach to writing, it can inhibit a collaborator’s ability to do their job. I experience this even as I work on animating Blank, I find moments that play differently in my head than perhaps my animator does. While wearing my producer hat, however, I am able to more objectively identify moments like these and ask the important questions: What is this scene’s purpose? What do you mean by this? How long is this 1/8 page playing in your head? How many setups? The list of questions goes on. It boils down to communication, starting from the script’s blueprint to the director’s vision.

I also think that something equally important is that writers and directors should go into their project knowing that it will continue to evolve for the better with the input of collaborators. That doesn’t mean that writers and directors have to take every note into consideration or make every change, but they do have to keep the project’s best interest as the top priority and make the decisions based on that. That comes with empowering your team of three in a short film or many more in a studio feature to have a voice and feel safe expressing their opinions. But it does start with the writer and director having a clear vision of what they want to say—in my experience, the process is much smoother when writers and directors are able to articulate the vision, and it has made my life as a producer much easier because I am able to better support that in every stage of the process.

Related to the creative process. . . in Blank, you close with a decisive message: that there is beauty and comfort in an imperfect world. I see people all the time allow everyday distractions and negativity and fear of the unknown kill their motivation to be an artist. Now more than ever. Perhaps a philosophical question deserving of more than one answer, but as a writer, how can you tune everything out and believe that what you’re doing is worthwhile?

I think my answer might change one day in the future, and I’m convinced that if you had asked me this even a couple years ago it would have been different.

With Blank, I thought about an environment populating a person, and then I had to come up with a way to show that something innate in us rises to the surface—for Blank, it was his Latino culture expressed through music. For me, it’s about how I call East Los Angeles home and how much of it molded me.

As Blank (the character) further becomes alive with skin pigmentation and finally losing all the “sketchiness” in his animated body, the “more alive” he becomes. In my life, my Mexican heritage is what truly gives me my voice in this industry—that’s why I’m intentional in telling stories like this of Blank, who is just a “regular” person, and not retelling the story of Blank as an immigrant.

When Blank approaches the door to the real world and peeks through it, he sees a world of uncertainty. And when he makes the decision to walk through the threshold, he observes others who are seemingly coming out of their own doors—having just been populated through their own experience. Each person/character there feels that it’s better to commence a new journey in the real world, built of uncertainty, because whatever convictions they have will make their journey worthwhile to them and to those they impact.

I have to believe that like Blank, my experiences are different enough for me to make an imprint on this industry as a writer and in my community as hopefully one day, a role model.

Bernardo Duran Jr. was born and raised in East Los Angeles, CA. He earned undergraduate and graduate degrees in Business Administration from Cal State LA and the University of La Verne and later earned a second graduate degree in Film & TV production from the USC School of Cinematic Arts in 2014.