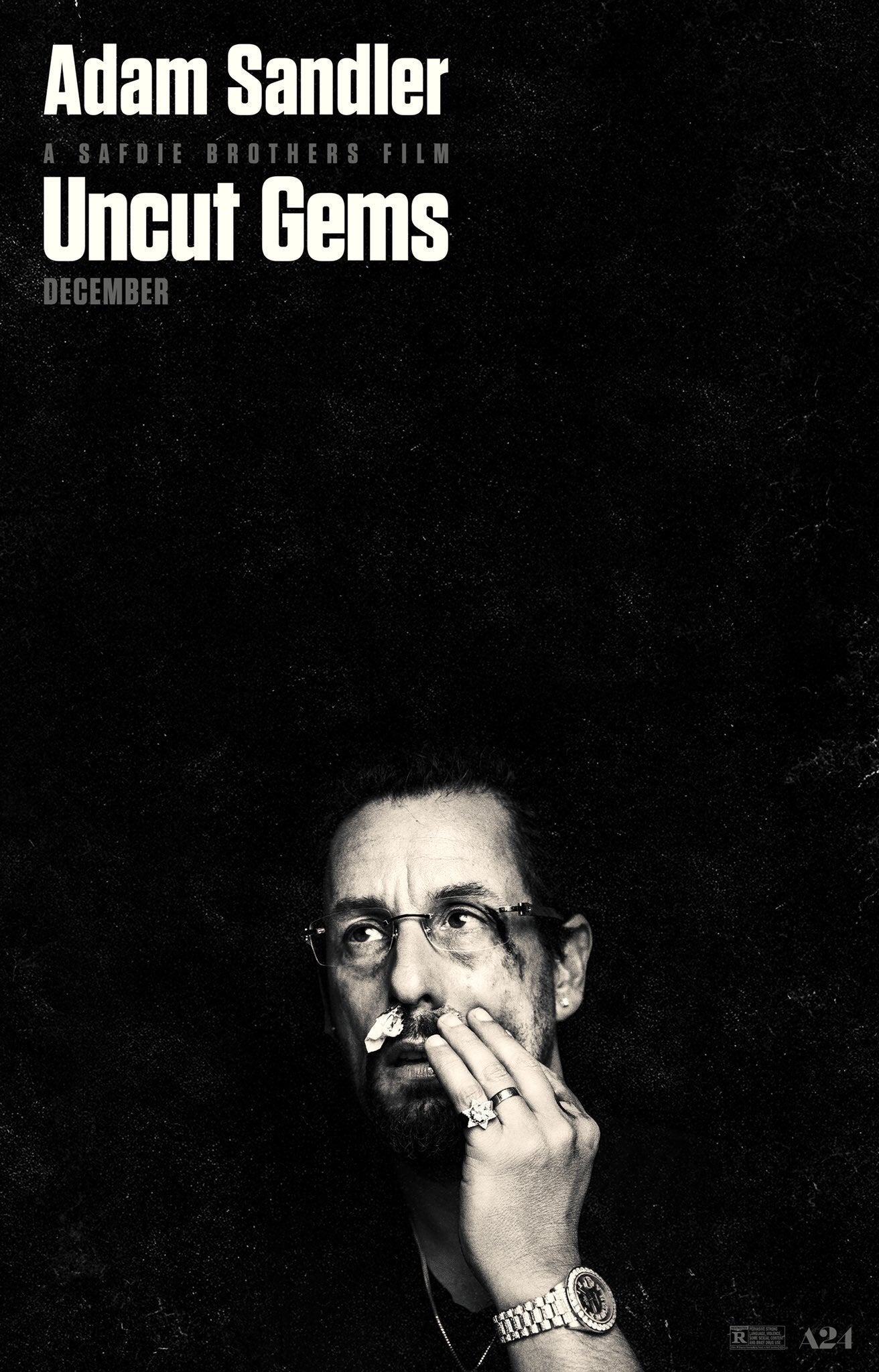 The comedian in a dramatic role.

While it is always catnip for an audience to see a beloved funnyman (or woman) stretch their acting muscles and enter new creative territory, the end results are oftentimes mixed—sometimes it works, and other times it really doesn’t. When it’s successful? The results are gorgeous, unexpected, and incredibly engrossing to watch. When it’s not? Well. . . buckle up.

Adam Sandler’s performance as Howard Ratner in Uncut Gems not only falls into the former category, but also is, bar none, the best performance of the year.

Best performance of the year.

Uncut Gems is a pulse-pounding, frenetic, panic-attack-on-celluloid crime thriller that follows Howard Ratner, a New York City Diamond District jeweler up to his neck in debts resulting from his severe gambling addiction. When he comes into possession of an extremely rare Ethiopian black opal valued at $1,000,000, Howard throws himself into his biggest scheme yet—a high-risk bet with the largest potential payout of his life. But it’s also one that puts him directly in the crosshairs of the loan sharks out for his blood, as well as jeopardizing every other facet of his life.

Already setting box office records for its indie darling distributor A24, Uncut Gems is an absolute gem (see what I did there?) of a film. It features a near perfect screenplay from Ronald Bronstein and the Safdie Brothers (who also directed the movie) that successfully creates a dimensional, authentic, and gritty character study of a compulsive gambling addict while never once veering off into over-sentimentality or failing to entertain the audience. The filmmaking is also masterful, perfectly capturing the anxiety-riddled, ambitious recklessness of Howard, the film’s story-world, and NYC at large, and every single actor and actress—a collection of seasoned industry professionals and first-timers—deliver incredible character portrayals. Julia Fox as Howard’s girlfriend and Lakeith Stanfield as Howard’s main business associate, in particular, are scene-stealers every time they appear on screen.

At the end of the day, though? The movie completely lives and dies with Sandler. Stated succinctly, as fantastic as all the other components of the film are, if Sandler did not absolutely “deliver the goods” as Howard, the entire picture would fundamentally crumble. Sandler’s turn as the incorrigibly slimy, perfectly-imperfect Howard is the main event here, and the rest of the film shapes itself in service of that. An apt (and fitting, given the film’s title) analogy is an engagement ring—while every single part of it is vital and beautiful in its own right, it’s all in support of one thing, and one thing only: that sparkling, luminous center stone.

Moreover, Sandler’s pitch-perfect performance is remarkable on many levels. He manages to make an absolutely despicable human being—someone who fails every single “likable” screenplay character writing test you’ve ever heard of—into someone that you are deeply intrigued by and want to follow all the way to the film’s conclusion. Even when Howard is making one morally reprehensible decision after another, you can’t help but feel as though you want him to succeed—if for no other reason than to calm down your jack-hammering heartbeat. Furthermore, Sandler injects such pathos and charm into Howard, and so disappears into the part, that you completely forget that this is the man responsible for critically-reviled pieces like Jack and Jill and Grown-Ups. All in all, Howard is the equivalent of a massive, illegal beach bonfire—you’re not supposed to get near it, but you simply cannot help being drawn in to its raw, unmitigated magnetism.

At the end of the day, with Uncut Gems, Sandler has firmly planted himself into the upper echelon of great modern-day actors, and fully deserves an Oscar nomination (at least) for his work.