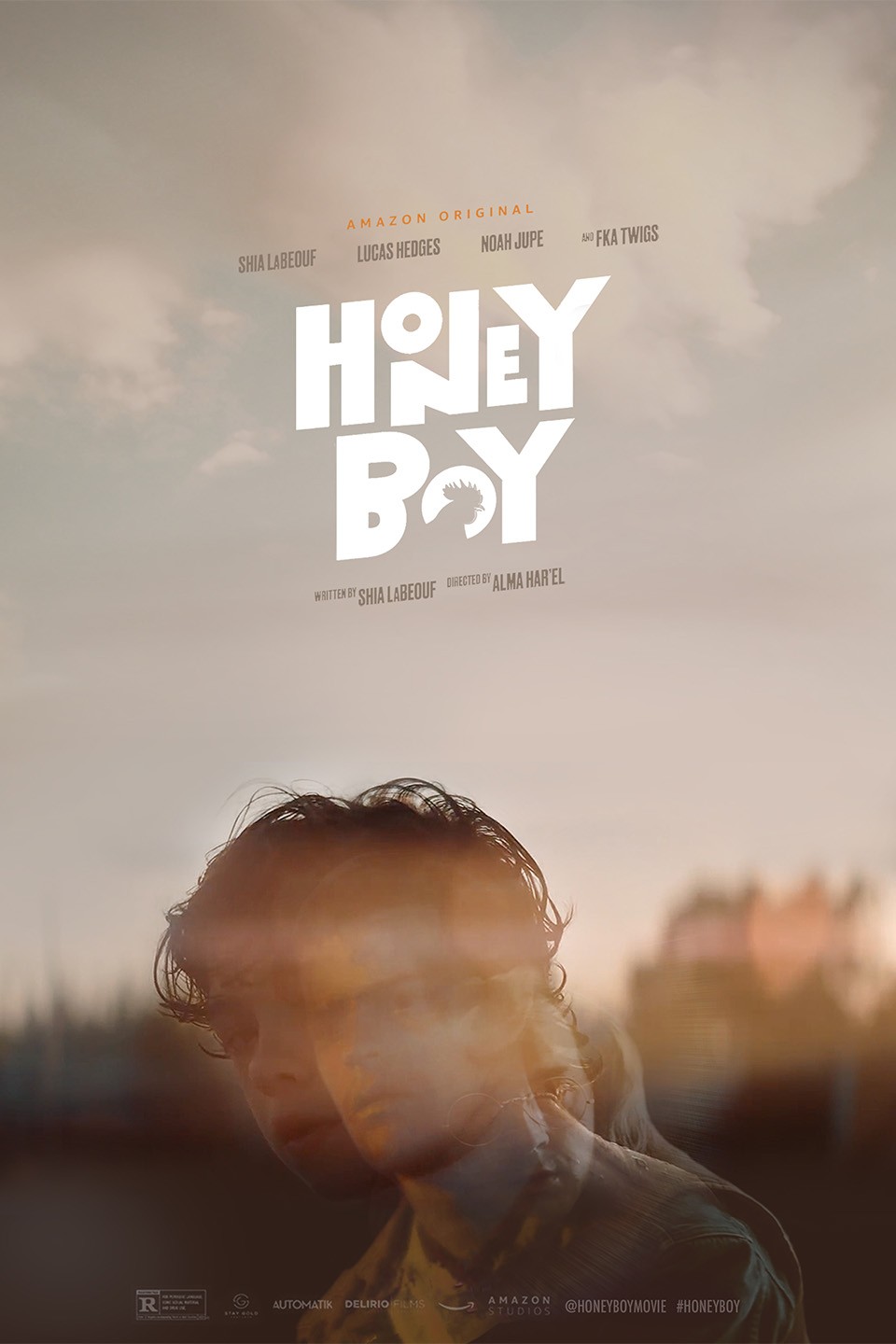 “Write what you know.”

Every writer in the universe has heard this supposedly sage advice at one point in their careers. A good portion of them have probably bristled at those words, thinking it is incredibly limiting—that if you’re not exclusively writing something based on direct life experiences you’re somehow “lying” and are inferior as an artist.

And then when something like Honey Boy comes around? It’s apparent what those people are trying to say when they say that: approach your material honestly, no holds barred.

Honey Boy is an emotionally raw, beautifully poetic look at the tumultuous relationship between a young actor (Otis) and his abusive father (James), and the toll it takes on Otis’ mental health during his maturation into manhood. It is told in two interweaving storylines: the first being 12-year-old Otis living with James in a motel while starring in a hit children’s TV show, and the second being a 22-year-old Otis looking back at his relationship with James through exposure therapy in court-ordered rehab.

Drawing heavily from his real life as a child actor and his relationship with his own father, writer-actor Shia LaBeouf absolutely knocks it out of the park with both his script and performance as James. Additionally, director-producer Alma Har’el helms with adept precision, underscoring the film’s themes by providing spectacular, documentary-style visuals as well as drawing out all-star performances from her cast members.

Simply put, there’s a lot to love about Honey Boy. It is catnip for lovers of independent cinema—completely and utterly character-driven, equal parts funny and heartbreaking, and is a vanguard of unusually structured storytelling.

All that said, however, the real standout of Honey Boy is LaBeouf’s script. Specifically, it brilliantly deconstructs the wildly misunderstood “write what you know” axiom.

It’s unflinchingly honest in dealing with the nuances of difficult-to-talk-about topics.

When formulating a script that revolves around true events, especially ones that are highly personal to the writer, there is oftentimes a tendency to treat the material with “kid gloves.” Meaning, certain subjects that are deemed “too painful” might be glossed over or entirely skipped in favor of story elements that are more “forgiving” or are easier to digest for an audience.

Honey Boy, at no point whatsoever, attempts to do that.

And that’s what makes it truly special.

This is evident in quite literally every scene between young Otis and James. Like in actual abusive relationships, the interactions between them crescendo and decrescendo—they are not all bad nor are they all good. By not portraying James as a one-note monster (but not shying away from the horrific abusive behavior he inflicts on Otis), LaBeouf depicts a more realistic situation that, through its harrowing authenticity, is inherently a thousand times more compelling.

This aforementioned dogged pursuit of honesty also carries through to the “secondary” storyline of Honey Boy: 22-year-old Otis in rehab—particularly in the scenes where he is undergoing exposure therapy to deal with his diagnosed PTSD. Just as they are in real life, these therapy sessions are incredibly tough on 22-year-old Otis, and the ways that the scenes are written highlight that, intimately laying bare the wide spectrum of his emotional peaks and valleys throughout the process. LaBeouf reportedly wrote the screenplay while he himself was in court-ordered rehab, and that brutal yet tender frankness comes through in a major way. And for that, LaBeouf deserves every single plaudit he has received.

All in all, Honey Boy is a masterclass in up-close-and-personal, truthful storytelling, and provides a valuable reminder to screenwriters of all levels: no matter what type of story you are telling, make sure it is honest and thoroughly grounded in reality.