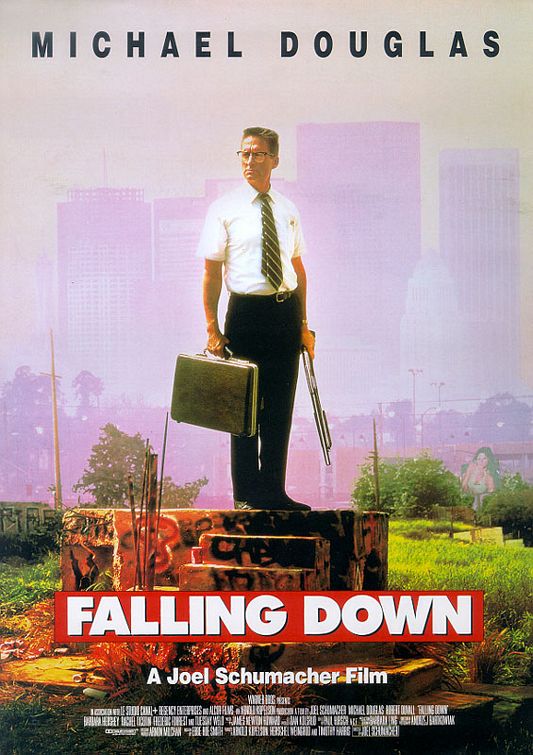 In a city rife with racial tension, a struggling economy, and a dwindling middle class, a disgruntled middle-aged man has armed himself with a bag of guns and is rampaging the city. This may seem like a present-day news headline, but it’s actually the plot of a Joel Schumacher film from 1993 starring Michael Douglas. The relevance of the film is even more poignant today. With racial injustices prompting Black Lives Matter, and a disgruntled middle America electing Donald Trump into the White House, the plot for Falling Down seems to focus on the exact type of man who might vote for Trump and fit into a 2018 environment.

Michael Douglas plays a character we know only as “D-FENS,” based off his vanity license plate. The film starts in the middle of a blistering Summer day in Los Angeles, and D-Fens is stuck in traffic. Headlights and construction are all he can see, and in a visually unsettling montage of images, we get the impression that D-Fens has had “enough.” What he’s had “enough” of is uncovered over the course of the film, and it’s part of the film’s strength that we merely start out with a relatable character stuck in traffic. In a moment of pure frustration, D-Fens gets out of his car with his briefcase, and leaves his car in the midst of the traffic jam. “I’m going home,” D-Fens tells a fellow gridlocked individual (ironically played by the writer of the film, Ebbe Roe Smith).

Thus begins D-Fens’s journey across Los Angeles. His first stop is a payphone, but he’s missing the appropriate amount of change to make a phone call.  So, he stops into a local Korean bodega to get change. This is where the film starts to pick up momentum and veers into controversial territory. Frustrated with the Korean shop owner’s insistence that he must buy something in the store to receive change, D-Fens grows increasingly animated, to the point where the Korean shop owner reaches for a baseball bat. D-Fens grabs the baseball bat and proceeds to launch into a racist tirade about “you people” while trashing the store. Hmm, you might wonder, perhaps this D-Fens guy isn’t so likable. You’re correct in feeling that. D-Fens is actually the villain. And that’s when we get to meet the truly likable hero of the film, Prendergrast, a near-retirement cop played by Robert Duvall.

A lot of the controversy about Falling Down when it initially debuted in 1993 was that some people viewed the film as racist propaganda. That it showed an “anti-hero” who takes out all of “our” (the audience) collective frustrations about life. And for some people, it seems that it has become a sort of “hero” story about a guy who’s at the end of his rope and is wreaking havoc on the city of Los Angeles like it’s his enemy. But if you watch the film as the social commentary it is, you can see that it represents the type of privilege-gone-wrong that, potentially, causes the kind of violence we see today.

After the Korean store, D-Fens encounters a couple of Latino gangbangers (played in an overly stereotypical fashion) who try to mug him. D-Fens rightly defends himself, but takes it a little too far and bashes the two men with his stolen baseball bat. All D-Fens wants to do is make a call, and so he proceeds to leave the beaten men to find the nearest payphone. That’s when he finally talks to his ex-wife Beth, played by Barbara Hershey. Now, we’re finally getting to understand who D-Fens truly is. Beth is scared of him, and D-Fens indicates he’s coming home for his little girl’s birthday party. That makes Beth even more scared, and she calls the cops. But those Latino gangbangers come back for more, this time armed with a bag of guns. And in a confluence of convenience, they crash their car while trying to shoot at D-Fens. This provides D-Fens the opportunity to stalk up to their disabled car, grab the guns, and proceed to murder them while they’re injured.

The stakes have gone up. . . D-Fens has a whole lotta guns, and he’s angry enough to use them on pretty much anyone. His next source of frustration is a McDonald’s-type fast food restaurant that refuses to serve him breakfast at 10:33am (3 minutes past their breakfast cut-off time). But D-Fens has got the guns to force the situation to go in his favor. Restaurant in panic, D-Fens walks out with his substandard breakfast sandwich (“why is this not like the picture??”) and continues along his way.

The cops, mostly Prendergrast, are on D-Fens’s tail at this point. And we get to see the lovely moments where bumbling-yet endearing Prendergrast puts the pieces together. Prendergrast is a great detective, but he feels it’s time to retire to take care of his ailing wife. The ailing wife has pretty much lost her mind and suffers from an anxiety disorder because they recently lost their child. It’s all ridiculously endearing for Prendergrast to think he needs to give up the detective work he loves to make his wife feel better. And as Prendergrast starts tracking D-Fens through the seemingly unrelated incidents flooding into the police station, we get a sense that he’s actually a really good cop.

Meanwhile, ex-wife Beth keeps getting calls from D-Fens and the cops that visit her aren’t reassuring or at all helpful. She’s got a restraining order after all, and D-Fens has only threatened that he’s coming home, so there’s nothing they can do and they have more urgent calls to take care of. D-Fens then stops at an Army Surplus Store. He needs new shoes, and while the owner of the store seems like a homophobic asshole, D-Fens likes the looks of a pair of combat boots. At this moment, a cop on the prowl for D-Fens, happens to enter the store. The Army Surplus owner is a fan of D-Fens; he’s been listening to his CB radio and really likes the idea of this angry man shooting up Latino gangbangers and messing with Korean shop owners. So, of course Army Surplus owner covers for D-Fens and drags him down to his secret Nazi lair, complete with gas masks, swastikas and Nazi paraphernalia. This is also a controversial moment in the movie. D-Fens, while he’s an antagonist/villain by any other standards, is not a white supremacist. He’s just your average disenfranchised white male who’s suffered from losing his job, losing his wife, and subsequently losing his mind. So when D-Fens gets into a confrontation with this white supremacist shop owner, he rightfully (or at least in his fractured mind) kills him.

D-Fens’s anger stems from him feeling like the world doesn’t care about him. He used to be a nice, middle-class man with a family. Now, he’s unemployed, divorced and the whole world seems to be against him. At the end, when D-Fens has finally chased down his ex-wife and his child, good ol’ detective Prendergrast has also caught up with him. Prendergrast’s wholesome, conversational approach seems to finally resonate with D-Fens. And in a moment of clarity, D-Fens asks Prendergrast “I’m the badguy?” Prendergrast is forced to shoot D-Fens when D-Fens pulls a water gun. It’s a moment of suicide-by-cop that shows that D-Fens understood his options were limited after he’d murdered people.

Yes, D-Fens, you are indeed the “bad guy” in this story. And this story feels incredibly relevant for so many reasons.

The movie explores how even the most seemingly normal person can become so overwhelmed with the supposed injustices of the world that they feel the need to take power by harming others. It also shows the ease of violence that comes with, more or less, readily available guns. This film is a study in how to write an antagonist, and how to make a connection with even the most vile person. Some people watch this movie and see a hero in D-Fens, someone who enacts all their deepest, darkest fantasies. I see a cautionary tale about what can happen when someone’s expectations of life turn out to be greater than the reality.

When the film was originally shot in 1992, the final few days of filming took place right as the L.A. riots broke out. There’s an interview on the DVD with Michael Douglas about how he felt the film represented a specific, societal frustration, and how the riots embodied that frustration.

He was right, and yet, those same frustrations still abound. I’m not saying Falling Down offers any answers on how to deal with that frustration, but it does provide some insight into the mentality of others.

And it provides an excellent blueprint for how to tell a story from the viewpoint of an antagonist.