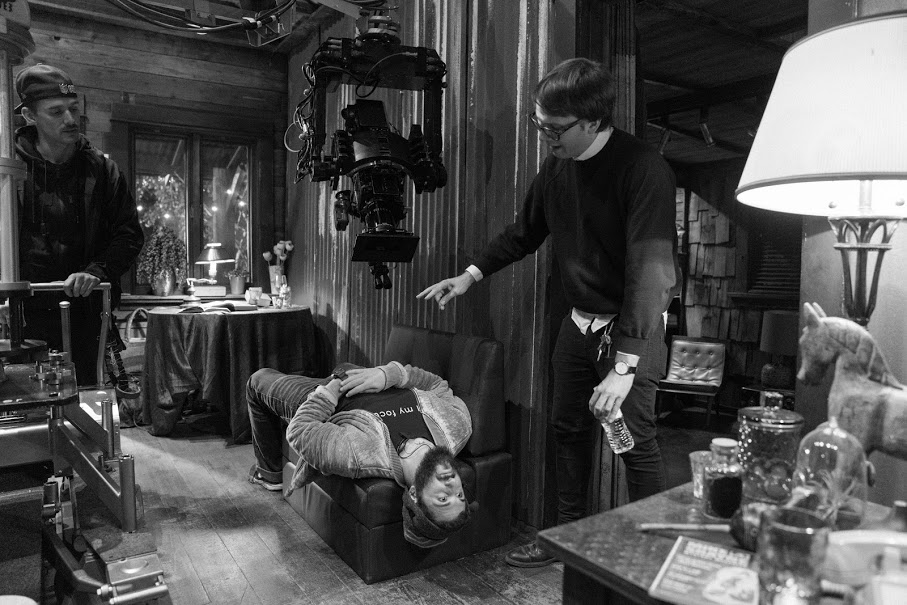 Gianluca won the 2017 Script Pipeline First Look Project with his short film Chimeras, a crime/thriller. The short served as inspiration toward a feature screenplay version, which received a “Recommend” from Script Pipeline in 2018.

Chimeras is such an incredibly well-put-together short film. While the subject matter might be uncomfortable—relinquishing one’s child for survival—the themes you’re going for here land hard. What sparked the idea? What were some of the underlying commentaries you were aiming for?

I remember reading some old news articles back in my hometown (Trieste, north-east Italy, at the border by Slovenia), where a lot of different illegal trafficking took place, especially before Slovenia entered the UE in 2004. That being said, I wasn’t really interested in the social issue itself, but I thought it could have been a great background for something very personal in terms of themes and characters: fatherhood and father/son relationships.

The feature script version of Chimeras is just as immersive and tonally defined as the short. Did you always see the short as a proof-of-concept for the feature? What came first?

No, that wasn’t the intention. I just wanted to make the short at the beginning, but while we were filming, there was a genuine excitement with everybody involved. Everything was coming along so well that I realized that these characters and atmospheres had a great potential for a longer, expanded version.

The feature screenplay felt like the right consequence of it, and the writing process has been very natural and alive, which makes me extremely happy because I always thought (and experienced) that result-based writing is a failure most of the time.

You’ve done a few other shorts and a magnificent music video for the band Phantogram. Do you consciously go into each project, scripted or unscripted, knowing it’ll have a specific Gianluca Minucci look and feel? If so, what are some of the ingredients that mark your content as unique and identifiable?

I’m very glad you mentioned the Phantogram video because I have a fond attachment to it. I consciously go into each project trying to make it as personal as possible. Another factor that I consider before doing a job (especially a music video) is how pleasant is that going to be. And with pleasant, I don’t mean easy, but a sweet collaboration between everybody involved, from the client to any crew member.

To answer your second question, I don’t know if there are specific ingredients of my content. I go with what feels right to me and what I would love to see as a viewer. I have kind of a weird working method, which is a mix of meticulous, obsessive preparation (researching, pre-visualization, pre-production) and a sort of crazy freedom on set, especially when working with actors. In terms of film grammar (both as a screenwriter and a director), I try to avoid anything that feels “writerly” and descriptive, always looking for something more elliptical and metonymic. I don’t do a lot of coverage and I concentrate more on actors and on camera movements that can convey specific feelings in a subtle way. Paul Thomas Anderson and Michael Haneke are masters in this kind of storytelling.

With that in mind, will safely assume you were influenced by some well-known films and directors when you first started studying cinema. Who were the major influencers? Growing up in Italy, though, were there Italian directors and writers that helped inspire you or push you toward a particular genre?

I have many influences, it’s really hard to say.

As a director, besides the two aforementioned directors, I’d say Cimino, Kubrick, Tarkovsky, Robert Bresson, just to mention some. As a viewer, Truffaut will always have a big piece of my heart. My influences come from several places, like the cinematographer Joaquin Baca-Asay (especially on James Gray’s We Own The Night and Two Lovers); the composer George Delerue; the theatre directors Carmelo Bene and Eimuntas Necrošius, the philosopher Gilles Deleuze. Regarding the latter, I highly recommend any young director and screenwriter to read his two books: The Movement-Image and The Time-Image: they’re way more illuminating and enriching than any screenwriting manual (which feels like a recipe cookbook to me).

I love a certain Italian Cinema. I aways loved Antonioni, Fellini, and Elio Petri, but on the top of my list there’s a movie called The Best Of Youth by Marco Tullio Giordana. There are two wonderful writers that are great inspirations—Ugo Pirro (Investigation of a Citizen Above Suspicion) and Franco Solinas (The Battle Of Algiers, State of Siege, Mr. Klein)—but also everything the great actor Gianmaria Volontè did. Right now we have a wonderful young Italian actor, Luca Marinelli, and everything he does is extraordinary and unique.

When producing anything, a short or feature, documentary or music video, all the core components are imperative. The actors, the DP, the crew, the editor. . . . However, what are other important elements on the periphery that some new writer/directors might miss their first time around? The intangibles that can make or break the success of a film.

Working with the people you know, trust, and love. Having a good producer who supports you and trusts your vision, especially if it stands out from the crowd, can really make the difference. Having a good amount of time for pre-production, especially scouting (the right location is as important as casting). Fight for the actors you want and trust them on set , don’t “direct” them—let them do their thing and be hands off—the only thing you can do is give them some prop to play around or tell them to improvise.

Pay attention to every single detail—set design, props, costumes, light, make-up, chromatic palette—in terms of dramatic results, not aesthetic. For instance, a linen jacket makes a different sound and has a different feeling than a leather one. Pick the one that better serves the dramaturgy and your character. A rug might “look better” than a tile floor, but maybe the sound of steps on the tile floor is what is needed for a specific scene. Directors should consider all this and more to create their atmosphere with the support and help of the other department heads.

The biggest obstacle, in your eyes, facing young directors who wish to enter the world of scripted content?

Most of the time, we are our biggest obstacle.

It’s very hard to get a script optioned, or a movie completed, and I know that frustration. No matter what, we need to keep writing, studying, and researching. That’s where the real pleasure is.

Born in Trieste, Friuli-Venezia Giulia, Italy, Gianluca studied Film History at University La Sapienza in Rome, his thesis being on Robert Altman’s cinema. He went on to achieve his MFA in Film Analysis, with a monographic essay on PT Anderson’s There Will Be Blood.

His short/promo Chimeras has won several awards and has been published in American Cinematographer Magazine. In addition, his music video Funeral Pyre for Phantogram was selected on Videostatic as one of the best music videos of 2017.