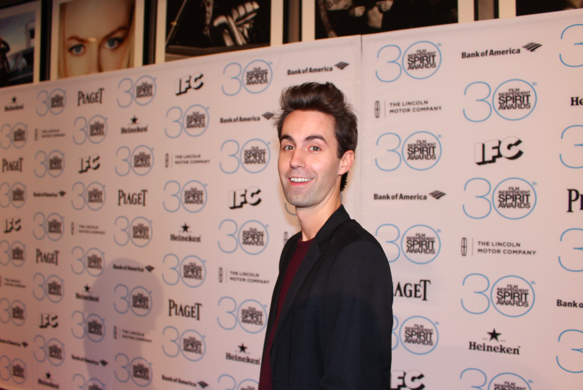 A top 10 finalist in the 2016 Script Pipeline Screenwriting Competition with the thriller Ballerina Girl, writer/director Evan Cooper will make his feature directorial debut with The Will O Wisp, starring Chrissy Metz (This is Us).

Your screenplay The Will O Wisp attached Chrissy Metz in 2017. Fill us in on the process from concept, to development, to getting a name attachment (and in our opinion, a stellar actress). How did it all come about?

The Will O Wisp actually came from a nightmare, believe it or not. I tend not to remember my dreams, and rarely wake up in a panic, but I had this frightening image of a man and his dog watching an endless tree line of phosphorescent lights. It sounds silly, but it was really haunting at the time, so when I woke up, I immediately started writing. Who was this guy? The dog? Why the lights? It took me the better part of 2017 to write, but got a great response.

Chrissy Metz is an incredible human being and a wonderful actress. We spoke over the phone about the script, then grabbed lunch. She was so in tune with the material, and her passion for what she does is infectious. I’m lucky to have her on board.

Your short The Armoire was well-received at fests. How big of a factor was that in shopping Wisp, showing that you could handle the genre on paper and on screen?

A lot of people told me not to direct. But it was getting to the point where my scripts just weren’t getting made–or they were being rewritten by morons. Out of frustration, my brother Brodie and I sat down together to write The Armoire, and we knew we had something special. We got double lucky with the cast and crew we found, and the film has since been circulated all over Hollywood. It’s what got me my director’s foothold for The Will O Wisp.

The key was just to shake things up and believe in my gut. When I say a lot of people told me not to direct, I mean A LOT of people. Fantastically discouraging, I know. Especially for an industry that’s supposed to be so positive. But fuck it, do things the way you wanna do things. Enough people are going to doubt you, so you might as well not doubt yourself. Or, if you’re like me and you do doubt yourself at times, just push forward with the discomfort. We self-financed the thing. Anyone can do it.

The Will O Wisp combines elements of supernatural horror and science fiction, yet the script still feels cohesive and neither component detracts from the other. Was it difficult balancing those elements while writing?

Writing a script in general is always difficult for me, especially when you’re not getting paid.

But it comes down to what your characters want. I think if you can unearth honesty, then you’re set. The whole balancing of situations really comes from them and what they’re going through. I think the horror matches up well with each individual’s internal struggle. Even the dog’s!

As a low-budget thriller with limited characters and locations, was the script’s budget always a consideration, and did that present any challenges while writing?

Never. I never think about budget constraints when I’m writing. I find that kind of stuff pulls me out of the material. I know some people can do it, just not me. If things get too pricey on set, we’ll just fire someone [winks].

Did the rewriting process change once you started targeting talent? Or was rewriting even necessary at that point?

I’m really lucky to have an awesome manager and agent, both of whom gave indispensable feedback on early drafts of the script. So by the time we started going out with it, it was in a pretty tight place.

The fun now is looking at locations and seeing how that might alter the story in some areas. Fun times ahead (sigh).

Every writer takes a different route into the industry. We’ll talk to 20 writers and get 20 completely different stories, with a few similar threads: starting with a solid writing foundation and hitting on a unique story, then setting yourself up for opportunity by making the right types of connections, whether it’s through competitions, referrals, and so forth.

In your view, what are some other commonalities all writers must check the box for? Looking back, what were the crucial decisions (or single decision) you made that propelled your career forward?

I’m a big believer in someone’s thumbprint. You pick up a script by James Cameron, and you just know it’s his. Same goes for writers like Steven Knight, or S. Craig Zahler. These guys are on a different level because they put their individuality onto the page–it’s what makes their material so unique and interesting to read.

I try to do the same. I think anyone can, they just have to be willing to throw down with themselves. It’s what’s key to getting read, or at least having someone want to read your whole script. A lot of readers give up after ten pages because the script is like every other script churned out by the Hollywood film school system. It’s important for me to write what I want to write and do it my way.

Future Evan Cooper: sticking with film or branching out to TV as well? Do you think it’s good for all writers to find their niche and stick with it if it’s working out, or that adapting to the landscape is necessary?

I’m definitely more partial to film. As far as directing, we’ll see what happens. Writing is something I’ll probably always do. I’m not sure I’m in a place to give advice to other writers, but my feeling is that you should always put your own thumbprint on things. You may think you have to conform to a way of writing or “being” in Hollywood, but that’s what sheep do. . . and that’s pretty boring.

Originally from Canada, Evan Cooper is an award-winning director and screenwriter. His debut film, the horror The Armoire, screened at more than 20 festivals across North America, creeped out packed audiences, and won multiple awards. The film tells the story of a fresh-off-the-bus, aspiring actress who discovers a piece of furniture in her apartment to be unnervingly haunted. Will O’ Wisp starring Chrissy Metz will be his first feature. He’s repped by manager Kailey Marsh and UTA.